At 26 million years ago, Australia had split from New Zealand and Antarctica and was moving north at more than 7 centimetres per year. It was also passing over a hot mantle plume that was melting the underside of the continent and throwing up volcanic features such as the Glass House Mountains and Flinders Peak. Then at 24 million years ago the Australian plate bumped into the Asian plates and it’s drift direction changed from north to west as well as slowing down from 6 cm/year to 2.6 cm/year. The hot mantle plume was now able to melt more of the underside of Australia and volcanic features were created from Cunningham’s Gap to Mount Warning, ”The Scenic Rim”.

Just after the Tasman Sea had opened up 65 million years ago, a number of mantle magma plumes penetrated the earth’s crust in the Coral Sea. As Australia drifted north away from Antarctica it moved across the hot plumes. The trace left by one of these plumes can be mapped from Fraser Island, through the Glass House Mountains, along the New South Wales/Queensland Border Ranges and down into Bass Strait.

The New South Wales/Queensland Border Ranges reflect Australia’s collision with Asia and its change in drift direction from north to west as its speed slowed from around 70 kilometres per million years to approximately 25 kilometres per million years. Australia had met Asia and the hot magma plume below Australia had time to melt part of the crust and spew the mixture of hot mantle magma and melted crust up into mountains that today form the Border Ranges. The largest of these eruptions is the giant shield volcano, known as Mount Warning.

The painting shows pale blue rivers draining away from Mt. Warning, across yellow and pinkish ropey lava flows, then over gently, folded, Clarence Morton Basin sediments (purple, red, orange/brown and pink) and finally across tightly folded, ancient basement rocks (green and yellow) of eastern Australia.
The Pacific Ocean can be seen in the top right. Tweed Heads is located at the bottom of the Ocean where the River meets the sea.

In south-east Queensland and northern New South Wales there lies a range of mountains known as the Scenic Rim. They were formed by Australia drifting over a hot spot in the mantle.

When Australia separated from Antarctica it drifted north and encountered the hot spot when it was beneath Fraser Island. Australia continued north at around 70 km per million years with the hot spot throwing up the Glass House Mountains and Flinders Peak. It then ran into a huge rock, of which the Solomon Islands are a part, slowed up and began to drift west. This allowed the hot spot to heat up the underside of Australia and it not only etched the bottom of the continent; it threw up overlapping mountains all the way to the coast and into New South Wales. This mountain range contains the Scenic Rim and is known as the Green Cauldron. Eventually Australia managed to wriggle around the big rock and continued north at around sixty kilometres per million years.

The painting shows a big fold in the New England Basement Rocks, red to orange pebbles and sandstones in a rift valley Floor Rocks and a series of overlapping and younging volcanoes forming the Rim Rocks.

I have often wondered how to make a hot spot. I could have researched the topic but this time I let my imagination take the journey. The following is almost pure fiction.

Most everything I see in nature travels in a spiral and yet most textbooks draw ascending magma in a straight line. So here I start at the bottom with a mature plume and a small ancillary plume. Let’s say we are starting deep in the inner mantle, somewhere around two thousand metres down. Then imagine a hot, light mantle being twisted by the underlying, spinning outer liquid core. This twisted mantle itself starts to spin as it rises. It rises as a hot plume, is less dense than the mantle that surrounds it and changes little in character until it meets the lower boundary of the upper mantle at around six to seven hundred metres deep. Here it’s ascent might slow down and it may start to spin off mini plumes or hot spots.

The green tear drops on either side of the plume represent oceanic, plates that are being sub-ducted back into the mantle.

The warm colours represent preserved rocks. The cooler colours (blues and mauves) represent rocks that have been removed by erosion.
At the top are the “Rim Rocks”. The angular pieces in the top represent volcanic glass shards in a volcanic ash. Some volcanic bombs are also present. Below the ash are the blue, tabular, “runny” lava flows. The mauve to blue areas are “sticky” lava flows. (the cliffs of Mount Lindesay). The brown area represents the preserved Mount Giles volcanic containing ash, glass shards and volcanic bombs. These rocks are 24 million years old.

In the middle are the “Floor Rocks”. The dark brown coal lenses and pale tan clays are preserved. The dots and ovals on a yellow background depict pebbles and sand that was deposited by rivers and lakes around 160 million years ago. 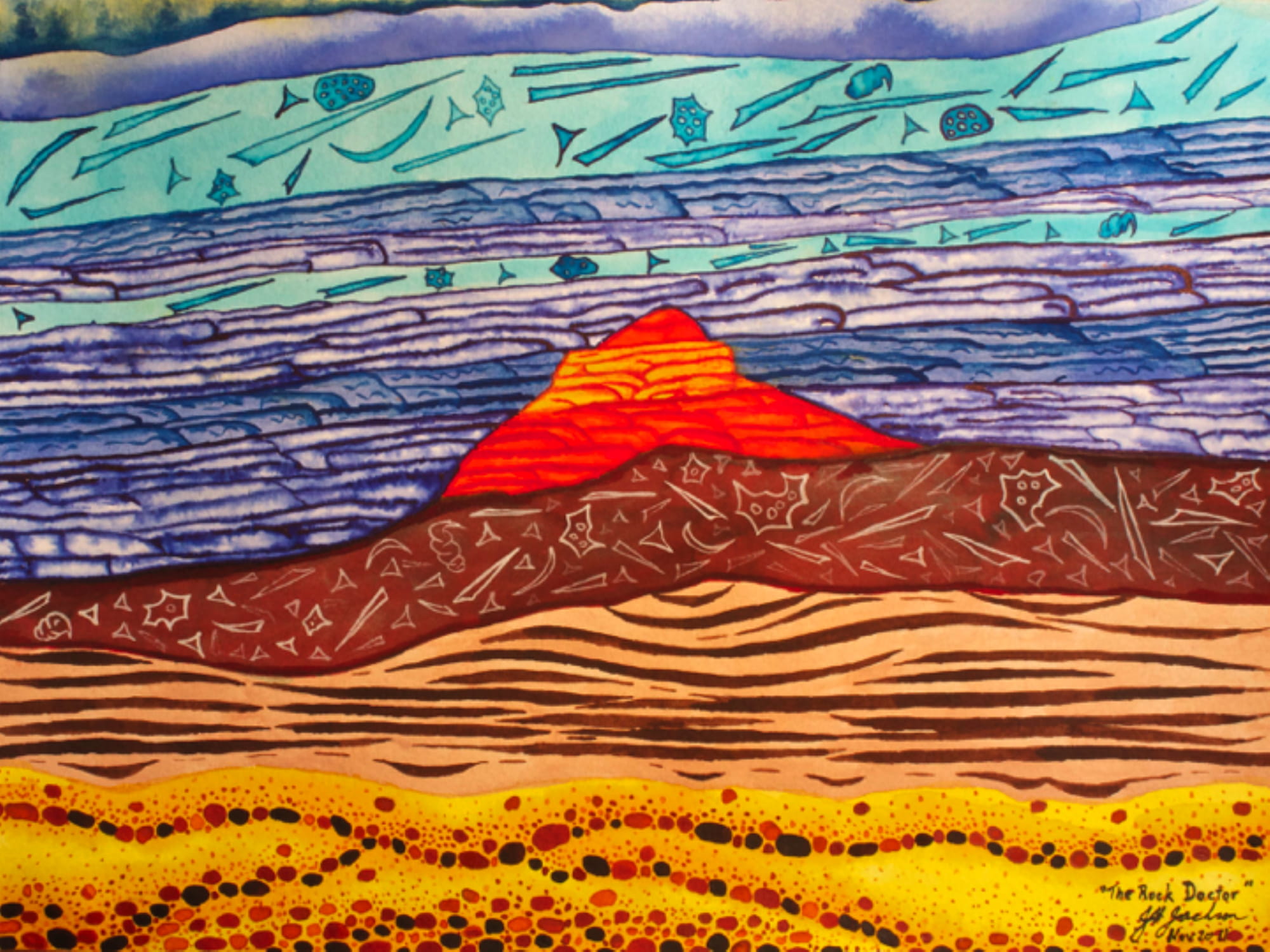